The desire to visualize biological structures and their function in vivo on the microscale has been a major driving force in biomedical optics for the last decades. This has led to major improvements in label free optical microscopy, which have significantly expanded its range of applications. We utilize micro-Raman spectroscopy and microscopy to provide complementary contrast to fluorescence excitation due to the fact that both can be achieved with very similar methods.

Visualization of Raman Scattering: the process of inelastic light scattering by molecular bonds.

Raman scattering is the inelastic scattering of photons by molecular bonds. Every chemical bond in a molecule has a characteristic vibrational energy, which can be exchanged with a photon during the scattering process. A Raman scattering event occurs when a photon (typically from a laser light source) is scattered by a molecular bond vibration. In this scattering event a small fraction of photons (~ 1 in 108) is inelastically scattered and exchanges energy with the molecular vibration. The scattered photons can either be red-shifted by providing energy to the bond vibration ("Stokes" Raman scattering) or blue-shifted by receiving energy from the bond vibration ("anti-Stokes" Raman scattering). The difference in energy between the incident and scattered photons corresponds to the energy of the molecular vibration. Detection of these scattered photons results in a spectrum of Raman peaks, each of which is characteristic of a specific molecular bond vibration. Collectively, these peaks provide an intrinsic "molecular fingerprint" of the sample (the Raman spectrum), resulting in a wealth of information about the chemical bonds associated, e.g. with DNA, RNA, proteins, lipids, and other biomolecules present in tissue or even just a single cell. The Raman spectrum in its entirety provides not only information about the identity, composition, structure, and conformation of biological samples, but also about interactions between macromolecules, for example DNA-protein or protein-lipid interactions. 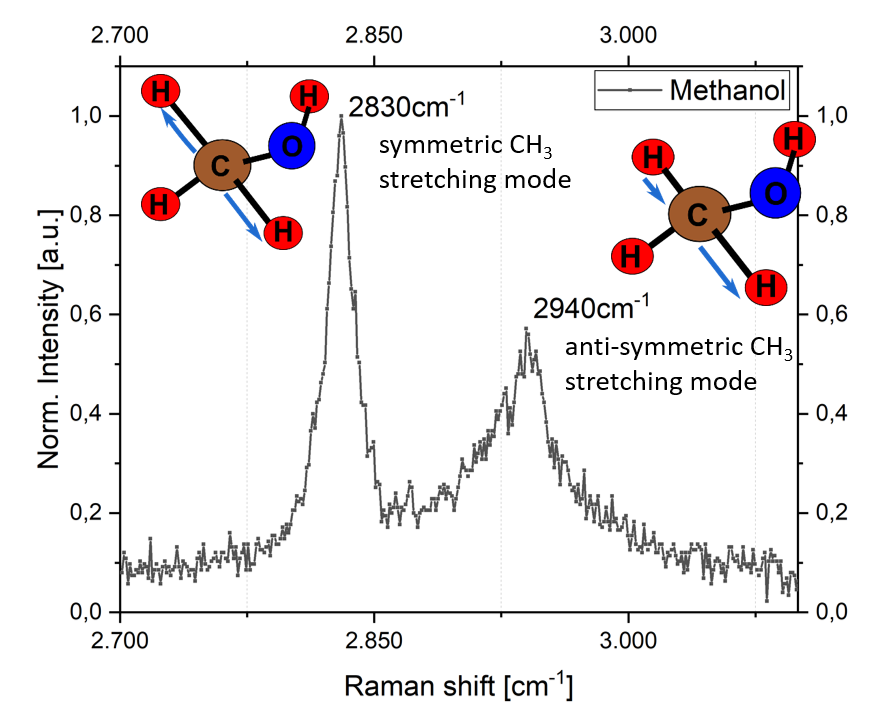 A typical micro-Raman spectroscopy setup as utilized in the analysis of single cells.

Over the past several years Raman micro-spectroscopy has proven to provide high sensitivity and specificity for identifying cancer cells in live samples. Recently, our group demonstrated better than 98% sensitivity when classifying live hematopoietic cells from immortalized cell lines as either neoplastic or normal by using a laser tweezers confocal micro-Raman spectrometer and principal component analysis of the acquired spectra. The resulting analysis was able to show that differences between normal and cancer cells could be quantified mostly based on differences in the local cellular concentration of DNA and proteins. We were also able to demonstrate that similar changes can be detected in samples from cancer patients, or between pluripotent stem cells, cells derived from these stem cells, and adult cells. Similarly, we were able to track the uptake and processing of metabolites by individual bacterial cells purely on monitoring their Raman spectra with time. Another approach we are currently exploring is to utilize resonant Raman scattering in ultra-cold environments (liquid nitrogen) to study the hydroxylation of methane (CH4) and the desaturation of fatty acids in chemical complexes (Diiron Enzyme) in a collaborative work.