Despite worldwide awareness of the crisis and international efforts to combat the disease, the AIDS pandemic caused by HIV infection continues to be one of the greatest threats to human health and development. The fact that there is still no cure for AIDS or a vaccine against HIV is testament to the unusually robust mechanism(s) by which HIV survives and proliferates in the human body. We recently set out on an ambitious goal utilizing discoveries made by two of the most recently awarded Nobel prizes (Medicine - for the discovery of the human immunodeficiency virus (HIV), and Chemistry - for the discovery and development of the green fluorescent protein (GFP)) to study the mechanism and quantitatively evaluate the process of direct cell-to-cell transfer of HIV.

Through a close collaboration between our group at the Center for Biophotonics, the Mount Sinai School of Medicine in New York City, and the UC Davis Department of Internal Medicine we were able to image the direct cell-to-cell transfer of HIV from infected T cells to uninfected T cells in 3D at high speed and with unprecedented sensitivity. This direct virus spread is enabled and promoted through adhesive contacts between HIV infected and uninfected cells, called virological synapses. To study the virological synapse, we benefitted from our close collaboration with the group of Prof. Benjamin Chen, who was able to successfully create a highly fluorescent, infectious HIV-1 molecular clone, which carries the green fluorescent protein (GFP) internally within the structural protein, Gag (HIV Gag-iGFP). Since this construct results in the labeling of each virus particle with thousands of GFP molecules, it provides us with a tool to track virus particles with unprecedented sensitivity - even in live cells.

In these experiments we mixed infected Jurkat T cells with primary CD4+ T cells and loaded them onto a gas-permeable cell imaging chamber such as the one shown in the photograph at the top of this page. Jurkat T cells can be distinguished from primary T cells in transmitted light microscopy by their significantly larger size. In fluorescence contrast, the Jurkat cells exhibit bright green fluorescence in their cytoplasm due to the expression of HIV Gag-iGFP. Rapid scanning of the cell mixture is achieved by observing the cells in white light contrast to find primary T cells adhering to Jurkat T cells, such as the ones shown in the Figure on the right (A). Here, two primary T cells outlined by red markers can be seen in contact with a Jurkat T cells (green outline). After switching to fluorescence contrast, the formation of a bright accumulation of Gag-iGFP in the junction between one of the primary cells and the Jurkat cell can be seen (B). Stable interactions between infected and uninfected cells have been described as virological synapses, and we define this prominent accumulation of Gag protein as a synaptic button, which is formed by highly dense arrays of Gag. 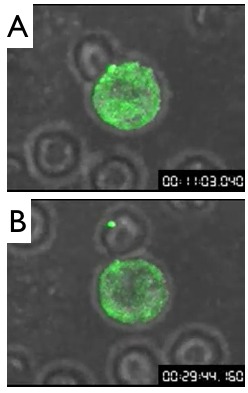 Adding an image splitter unit to our spinning disk confocal microscope allowed us to split the images into 2 channels that are imaged simultaneously on a CCD camera. This allows us to illuminate the sample by trans-illumination through a longpass filter, separate the transmitted light image from the fluorescence and send it to one CCD channel, while the fluorescence image is sent to another CCD channel. The false-color encoded fluorescence image can then be superposed on the transmitted light image allowing us to view the cells as well as the fluorescence due to Gag-iGFP. The image sequence in the Figure to the right shows quite clearly how a primary cell is in contact with the infected Jurkat cell (A) and a virological synapse has already been established between them. After ~ 25 minutes after the start of the observation of these cells, transfer from the infected cell to the uninfected cell could be observed, in this case as a single cluster, which does not subsequently break apart, but moves to the distal end of the primary cell - away from the synapse (B).

More details about this work can be found in a recent paper in Science: