The term spin electronics or spintronics refers to a field, which aims to exploit the electrons' spin degree of freedom within electronic applications. Thanks to the well-known Hall effect and the anisotropic magnetoresistance (AMR), magnetic fields can be sensed electronically. Both effects are, however, limited when it comes to extreme miniaturization of the sensors. Such miniaturization is required, e.g., for modern high density hard disk drives. Here, one uses multilayer systems which exploit the giant magnetoresistance (GMR) or tunnel magnetoresistance (TMR). Devices built from such multilayers of just a few nanometers thickness allow in principle for the required downsizing.

Based on the TMR in magnetic tunnel junctions (MTJs) it is also possible to realize non-volatile magnetic random access memory (MRAM), which has some similarity to the ancient magnetic-core memory. An MTJ basically consists of two ferromagnetic films, separated by a thin insulating film. By pinning one of the magnetic electrodes with an antiferromagnet, a so-called "spin valve" is created, which usually has low resistance in the parallel magnetic configuration and high resistance in the antiparallel configuration. The magnetic configuration can be switched by external fields (or can be used for sensing them) or by strong current pulses, which is called spin transfer torque switching (STT). Making the magnetization perpendicular to the film plane allows for further reduction in size without compromising on the thermal stability of the junctions.

Being both fast and non-volatile, the MRAM technology holds the promise of merging today's RAM and hard disk or solid state drive technologies. This will make data access faster and allow for considerably lower power consumption.

Recent research revealed that spin-orbit coupling in certain materials leads to non-equilibrium spin accumulations within the materials or at their surfaces when charge current are driven. The subfield which aims for understanding and exploiting of spin-orbit effects in spintronics is now often referred to as spin-orbitronics. Among the most important effects in the field is the spin Hall effect, which converts a longitudinal charge current into a transverse spin current. This spin current can be used to exert a spin-transfer torque on an adjacent ferromagnetic layer, thereby inducing magnetization precession, domain wall motion, or magnetization switching. The magnetization switching is at the heart of a new magnetic memory concept, the spin-orbit torque MRAM (SOT-MRAM).

Another fascinating phenomenon is the Néel-order spin-orbit torque (NSOT), which is observed in antiferromagnets with a special combination of spatial inversion and time reversal  symmetry. When a charge current is driven through such a material, local magnetic fields emerge at the positions of the magnetic atoms. These fields have the same staggered order as the magnetic moments of the antiferromagnet, which allow to effectively manipulate the magnetic order of the material. The most intriguing effect here is the switching of the magnetic order by 90° with intense current pulses. Due to the probabilistic nature of the process, the devices built from these materials show memristive properties and applications related to neuromorphic computing are envisaged.

The demands for many applications of spin electronic devices pose a serious challenge for materials science. Intrinsic properties related to the band structure and extrinsic properties of real thin films, such as grain sizes, film roughnesses, and chemical disorder, need to be carefully balanced. The interplay between interfacial and volume effects must be understood and controlled. In Bielefeld Markus has worked on the following subjects:

Néel-order spin-orbit torque: Up to 2019 one knew two metallic materials that combined the necessary symmetries for the NSOT, namely Mn2Au and CuMnAs. Thin films of both materials were studied in Bielefeld, the influence of film growth parameters on their properties and the electrical switching were investigated. A key aspect was the thermal activation, which allows to switch the magnetic order at room temperature. Despite the fundamental mechanism of the creation of the non-equilibrium local magnetic fields was essentially understood, many aspects of the electrical switching were tightly linked to the actual meso- and microscopic structure of the samples, which was investigated in Markus` group.

Exchange Bias: To stabilize the magnetization of one magnetic layer, the so-called fixed or pinned layer,  one couples it to a thin antiferromagnetic layer. Due to the exchange bias effect, a shift of the magnetic hysteresis away from zero field is acieved. This allows to construct MTJs that have a well-defined anti-parallel magnetic state, which is necessary to construct magnetic sensors or to build magnetic memories. Nowadays, materials containing Pt or Ir are used as antiferromagnets, which are costly and their production causes significant pollution. Alternatives without noble metals or rare earth element are necessary for a large-scale usage of spintronics. This was investigated for antiferromagnetic Heusler compounds by high-throughput screening using density functional theory. Furthermore, the exchange bias with antiferromagnetic MnN has been investigated. This is work ist still going on in collaboration between TU Darmstadt and Bielefeld University.

Methods: To investigate the properties of new materials, one deposits thin films of promising intermetallic compounds by magnetron sputtering. The co-sputtering tools in Bielefeld allow to create virtually any quaternary intermetallic compound. By carefully choosing the substrates and seed layers, the crystal structure, strain, and crystal orientation can be manipulated. The films can be characterized with various techniques, such as x-ray diffraction, magnetization measurements, optical absorption (from IR to UV), and electrical measurements. With synchrotron techniques such as soft x-ray absorption it is possible to investigate the magnetic properties of a film for each element individually. Electrical transport measurements are used to characterize the spin Hall effect with the Harmonic Hall voltage detection method, and experiments with current pulses serve to investigate the electrical switching of antiferromagnets and ferromagnets via intrinsic or induced spin-orbit torques. Based on the known crystal structure of a material, we can compute its band structure and many more properties with density functional theory (DFT) and many-body perturbation theory. Comparison of measured data with calculations allows us to obtain a deeper understanding of the materials and the measurements, particularly of spectroscopic data. Computational materials science using DFT helps to find new useful materials and predict their phase diagrams. The stability of new compounds can be predicted and the search can be narrowed to materials which are expectedly stable, thus saving resources in the laboratory.

This work is continued in collaboration between Darmstadt and Bielefeld. 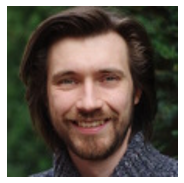 Dr. Markus Meinert studied Physics in Bielefeld, where he also received his PhD. In 2014 he became a Junior Professor. His work in Bielefeld was focused on the electronic structure of functional materials for spinelectronics. Since October 2019 he is Professor and Leader of the Fachgebiet Neue Materialien Elektronik at TU Darmstadt.
Goto top